The Most Common Types Of Bicycle Accidents 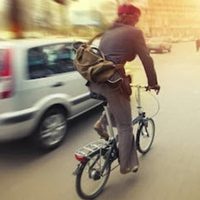 The number of bicycling enthusiasts has grown significantly over the last few years, with more and more people finding it a healthy and more cost-effective way to get around. Unfortunately, with the increase in the number of bicycles on the road has come a corresponding increase in bicycle accidents. These accidents are extremely dangerous for cyclists, who lack the protections of seat belts, airbags, and a barrier between themselves and the road. Fortunately, it is possible for accident victims who can prove that someone else’s negligence was the cause of their accident, to obtain compensation for their accident-related losses, including their medical expenses and lost wages.

Most collisions between cyclists and motorists occur because drivers simply don’t see cyclists until it’s too late to avoid a crash. The crashes themselves, however, fall under a number of different categories. One of the most common, for instance, involves a cyclist riding against oncoming traffic and a vehicle making a right turn in front of the cyclist. To avoid this, cyclists should make every effort to ride their bicycles on the right side of the road and to travel in the same direction as the rest of the cars on the road.

Bicycles on the road are given the same legal status as any other type of vehicle, so motorists must yield the right of way to them as they would to any other vehicle that is moving with the flow of traffic. Another type of common bicycle accident occurs when a driver pulls out of a side street or driveway from a cyclist’s right side, striking the cyclist or pulling out in front of the rider, who then collides with the left side of the car. Left cross collisions, on the other hand, occur when a motorist makes a left turn in front of a cyclist who is properly traveling with the flow of traffic.

Right hook crashes occur when a cyclist is traveling on the right side of the road and a vehicle passes that cyclist on the left before making a sudden right turn into the cyclist’s path. In most cases, this happens simply because the motorist forgot that the bicyclist was there, or because the cyclist was in the driver’s blind spot.

Dooring accidents take place when a rider is passing a line of cars that are parked on the road (to the right) and a motorist, who is sitting in one of those cars, suddenly opens his or her left side door while the cyclist is passing. Dooring accidents are thought to account for as many as one-quarter of bicycle accidents that occur in urban areas.

Were You Injured in a Bicycle Accident in Georgia?

Contact the law firm of Shiver Hamilton Campbell to speak with one of our dedicated and compassionate Roswell bicycle accident lawyers about your own legal options following a bicycle accident. You can contact us online or call our office directly at 404-593-0020.

By Shiver Hamilton Campbell | Posted on January 20, 2023
« Proving That Your Injuries Were The Result Of A Car Accident
Avoid Making These Mistakes After A Truck Accident »