Georgia Ranked As One Of Most Dangerous States For Pedestrians 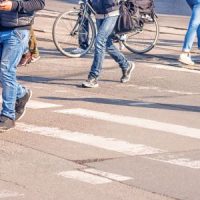 According to a report recently published by the Governors Highway Safety Association, pedestrian accident-related fatalities have increased significantly nationwide over the last two years. For instance, in the first six months of 2021 alone, 3,441 people were struck and killed in pedestrian-vehicle accidents, a statistic that represents a 17 percent increase from the same period the year before. Unfortunately, Georgia found itself listed amongst the most dangerous states for pedestrians in the report.

A Troubling Trend for Pedestrians

The increase in pedestrian fatalities over the last two years continues a long-term trend of U.S. roads being more dangerous for pedestrians and cyclists. In fact, over the last ten years, pedestrian fatalities have increased by 46 percent. Overall traffic fatalities have also gone up, with the National Highway Traffic Safety Administration (NHTSA) estimating that more than 30,000 people died in car accidents in the first three quarters of 2021. This is the highest number of traffic fatalities occurring during the first nine months of any year in nearly 15 years.

What is Causing the Increase?

There are a number of factors that could be contributing to the increase in both the total number of pedestrian deaths in the U.S., as well as the increasing fatality rate. A surge in dangerous driving during the pandemic (i.e. impaired driving and speeding), for instance, is thought to have contributed to this trend, as have:

Fortunately, accident victims who can prove that one or more of these factors contributed to their injuries could be entitled to compensation for their losses.

Who can be held liable for a pedestrian accident in Georgia will depend on the specific circumstances of the case, but could include:

Claimants who can prove that this type of negligence caused their accident could be entitled to financial compensation for medical expenses, lost wages, permanent disability, wrongful death, and pain and suffering. For help seeking compensation after your own pedestrian accident, feel free to reach out to our legal team today.

Speak with an Experienced Atlanta Pedestrian Accident Attorney About Your Case

If you or a loved one were injured in a pedestrian accident, you may be facing an uphill battle when it comes to recovering compensation for your medical bills and other losses. Having an experienced Savannah pedestrian accident lawyer on your side can make all the difference in the outcome of this type of claim. For help from one of our attorneys, call 404-593-0020 and set up a meeting with the dedicated legal team at Shiver Hamilton Campbell today.

By Shiver Hamilton Campbell | Posted on September 28, 2022
« The Potential Long-Term Effects Of Traumatic Brain Injuries
How Are Wrongful Death Damages Divided In Georgia? »