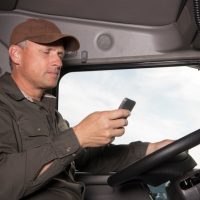 Responding to these dangers, the Federal Government has prohibited CMV drivers from texting or using hand-held cell phones while driving.  CMV drivers may not reach for a device, hold a cell phone, or press more than one button while driving.  Instead, the rule allows drivers to use voice-activated or one-button touch features on their phones to place, answer, and end calls, and use either earpieces or speaker phones for the duration of the call.  Violation of the federal rule may result in fines up to $2,750, and a driver with more than one offense may face disqualification.  A motor carrier that allows drivers to violate this rule could be fined up to $11,000.

Yet some point out that talking on a hands-free device can still result in dangerously distracted driving, since it requires a driver to divert his focus away from driving.  For this reason, some safety advocates believe that the federal regulations have not gone far enough to prevent distracted driving, and that all cell phone usage should be banned. If you or a loved one has been involved in a crash due to distracted driving, speak to one of our Atlanta personal injury attorneys today.