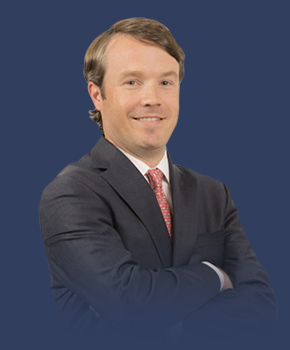 Scott grew up in Milton, Georgia, obtained his undergraduate degree from the University of Georgia and his law degree from Emory University School of Law. Following law school Scott spent the first part of his career defending large corporations in high stakes injury and death cases across the country. While Scott compiled trial victories on the defense side and rose through the ranks of one the largest law firms in the world, something was missing. Scott ultimately realized what was missing was service to people in need. Upon discovering that a change was necessary Scott sought out two of the top plaintiffs’ lawyers in the state, Jeff Shiver and Alan Hamilton, to transition to the plaintiffs’ side.

Plaintiffs’ lawyers often represent individuals who are going through some of the most challenging and uncertain times of their lives. Scott and the team at Shiver Hamilton Campbell understand that while advocating and fighting for clients is critical, genuinely caring for and walking with clients as confidants, counselors, and friends is equally important. Scott takes pride in the tremendous responsibility and opportunity that comes with standing with, comforting and guiding families through circumstances of serious injury or death.

Since switching to the plaintiff’s side in 2013 Scott has continued to accumulate trial victories, including multiple years with top verdicts and the largest jury verdict ever in a motor vehicle spine surgery case in Georgia. Scott’s willingness to try cases and established record of success at trial provides his clients leverage to ensure maximum settlement value. In addition, Scott has formed many close friendships with former clients that is the natural product of sincerely caring about and coming along side good people going through difficult times.

Scott’s commitment to service extends beyond his law practice. Scott serves on the Board of Directors for Murphy Harpst, a non-profit committed to serving some of Georgia’s most vulnerable children through residential treatment, foster care, and community programs. Scott also serves on the Board of Directors for the Atlanta Legal Aid Society, one of the oldest and leading providers of civil legal services for Atlanta’s indigent community.

Scott has spoken on multiple occasions at plaintiffs’ lawyer workshops regarding his trial success, including sharing the strategies behind obtaining the top premise’s liability verdict in the State of Georgia for 2017 and the top motor vehicle verdict in 2019. Scott has also been an invited speaker on the topic of civil litigation at both Emory University School of Law and Georgia State University.